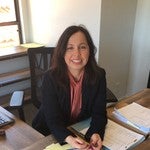 Paula Phinney graduated from Santa Clara University School of Law and has been a licensed attorney with the California State Bar since 1996.
Over the years, Paula has represented hundreds of clients in dozens of courts throughout California, including civil, bankruptcy, criminal, immigration, federal, and family court. Since 2014 she has devoted her practice almost exclusively to family law cases in San Diego County. Paula has handled high conflict divorces, high asset/complex financial issues, military divorces, move away requests, custody, visitation, support, restraining orders and cross-border family law cases. Paula has also settled many cases, giving clients an honest assessment of whether a case favors resolution outside of court.
Paula has also worked with clients and opponents to reach amicable resolutions, enabling parties to plan for their lives after divorce with the least amount of stress and uncertainty possible.

Paula is licensed to appear in all state courts of California as well as the United States district courts for the Central and Southern districts of California. She is a member of the North County Bar Association, and has been an active member of the Fiorenzo Lopardo Inn of Court since 2008. Prior to settling in San Diego, Paula lived in the Philippines, Japan and Spain. She speaks Spanish.

Reach out using our contact information below or send us a message using the form and we will get back to you as soon as possible.

Thank you for contacting us. We will get back to you shortly.

Please complete all required fields below.

Fischer & Phinney LLP Is Here for You

At Fischer & Phinney LLP we focus on Divorce & Separation, Child Custody, Child Support, Spousal Support, Property Division, Restraining Orders, High Net Worth Divorce, and Other areas of practice. We are here to listen to you and help you navigate the legal system.

We offer a Free Consultation and we'll gladly discuss your case with you at your convenience. Contact us today to schedule an appointment.